It is difficult to believe that it has been six years since I decided to move “back to Haiti” to work as a missionary teacher. Of the six years since I moved back, this past year has certainly been the most challenging. I had a number of “firsts” this year, from being sued to (briefly) evacuating the country, from breaking a bone to losing a former roommate. Often, it has often felt like I would not make it to the end of the year, but through the difficulties of life, Jesus’ words about being pruned so that we can bear more fruit have become very meaningful to me.

The school year began with me being taken to court by a former employee of the Bible college who had been terminated for intentionally giving students he didn’t like low grades. We won the lawsuit, but it had ripple effects in our church and I got the cold shoulder. Fortunately, at the pastor’s invitation, I was able to address the issue publicly, which resolved the matter. Nevertheless, it was sad to lose a former friend (the former employee) and to see our students who had studied under both of us feel torn and wounded by the dispute. It is always a tragedy when conflict cannot be resolved amicably in the Body of Christ.

This year, as I moved into my mid-30s, I became increasingly aware that I was no longer young. In October, I twisted my ankle while playing basketball. I thought the injury would heal quickly, but while the swelling soon disappeared, the pain never did. After re-injuring the same ankle in March (again while playing basketball), I went to the hospital, where X-rays revealed that the ankle had a small fracture. The doctor put me in a cast and I managed to get to school for four weeks using crutches. Once again, I thought the injury would heal before long but after the cast came off, I continued to experience pain and swelling. After returning to the U.S. and getting it checked out here, X-rays revealed that the fracture had never healed correctly and that two bones were now rubbing against each other, causing inflammation. The doctor told me that unless the bone healed on its own (which was unlikely since so much time had already passed), I would need surgery unless I want to live with pain for the rest of my life. I am currently seeking a second opinion, but I would ask you to pray for me since I do not have health insurance and have no way of affording surgery at the present time and need a miracle (whether medical or financial). 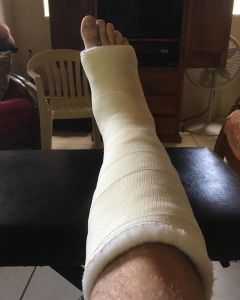 Finally, I received sad news in April that one of my college roommates, Ryan Harter, had passed away unexpectedly while on vacation with his family. Ryan was one of the first people I met at Portland Bible College in 2003. He was a man of character, creativity, and faith, and I will miss him.

In addition to these personal concerns, the nation of Haiti was rocked by political turmoil most of the year due to charges of corruption against the president and out-of-control inflation (the currency is now worth half of what it was worth just four years ago and people are being crushed by the high cost of food and other essentials). Anti-government protests have repeatedly paralyzed the country. To make matters worse, the government’s inability to pay foreign creditors on time has resulted in chronic fuel shortages that have made it difficult for me to get to work and for students to get to school. In February, with the country almost completely shut down by protests, I chose to evacuate to Florida for a week until things cooled down. While things were calmer for the remainder of the school year, news reports indicate that since I left on June 2, new protests have erupted to demand the president’s resignation. I don’t really know what might be in store for the upcoming school year.

In the midst of all this trouble, there were a few sweet moments. At our Christian high school, I got to see the first graduating class in the school’s history. All three of these students will be attending universities in the U.S. this fall and I am so proud of all their hard work! 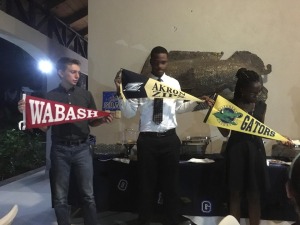 Over at the Bible college, this little fellow (a regular visitor during office hours) was so impressed during the time I spent on crutches that he made his own:

In the midst of the difficulties this year, it has felt like my faith has been stretched to the breaking point. Jesus’ words in John 15 about the “pruning” of believers have become very meaningful to me. I believe that God is working things into me that could not have been put there through any other means. Jesus promises that those whom the Lord prunes will bear more fruit. I choose to believe that his promise is true.

I would like to ask you to partner with me both in prayer and by giving financially. My teaching salary and my monthly support give me a guaranteed monthly income of only $1,000 USD. Since my expenses include $500 a month in rent, $100 in groceries, and $100 for gas & phone, I don’t have much margin for the occasional car repair, medical expense, or request from a friend in need. While I have been able on occasion to supplement my income by doing translation work and through one-time gifts from supporters, I am hoping to double my guaranteed income to $2,000 per month, which would allow me to purchase health insurance (which I will need more as I grow older), pay off my student loans (which are currently on hold), and create a contingency fund for emergencies.

You or your church can help me continue my work in Haiti by committing to support me financially every month. Even a small gift like $20 a month would go a long way. I am also more than willing to speak to your church, youth group, small group, or mission society and give you a detailed presentation of what I and my parent organization (Rehoboth Ministries) do in Haiti.